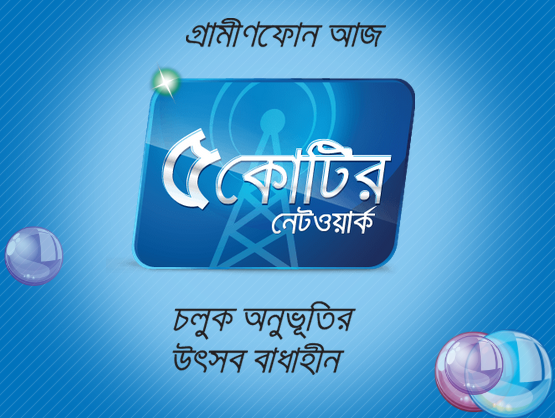 GP is now the leading telecommunications operator of Bangladesh is part of Telenor Group which has a presence in 13 markets across Europe and Asia.

Before Grameenphone’s inception, the phone was for a selected urbanized few. The cell phone was a luxury: a floating accessory for the select elite. The mass could not contemplate mobile telephony as being part of their lives.

Since its inception, Grameenphone has built the largest cellular network in the country with over 9700 base stations.

Presently, nearly 99 percent of the country’s population is within the coverage area of the Grameenphone network.

Grameenphone has always been a pioneer in introducing new products and services in the local telecom market.

GP was also the first telecommunication operator in Bangladesh to introduce the pre-paid service in September 1999. It established the first 24-hour Call Center, introduced value-added services such as VMS, SMS, fax and data transmission services. Also include international roaming service, WAP, SMS-based push-pull services, EDGE, personal ring back tone and many other products and services. In October 2013 the company launched 3G services commercially.

The entire GP network is 3G/EDGE/GPRS enabled, allowing access to high-speed Internet and data services from anywhere within the coverage area. There are currently over 2.2 million Internet users in the Grameenphone network.

Today, GP is the leading and largest telecommunications service provider in Bangladesh with more than 55 million subscribers as of October 2016.